What Is A Web Engineer? | A Detailed Explanation

Personally, I would consider the "engineer" in "web engineer" to mean they understand the more technical parts of building websites.

For example, a web engineer would understand how to make a web application whereas a web designer would only be able to make a static website. Briefly, a web application, is a website that allows the user to interact with it a lot more than a static website does. Some examples of this would be Twitter, Facebook, Quickbooks, TurbTax and many others. All of these websites allow the user to do more than view static content.

But, we went a little off topic.

To many, engineer is just a job title and doesn't actually mean your job is any different than a developers.

But, I think that there is definitely some distinction in my experience. For example, a web designer might only know HTML, CSS, and JavaScript, but a web engineering would know all those and they would also know how to make changes to the website live from a user interaction. They would also know how to make an API request and then do something with that API request (an API request is basically just fetching some information from another computer somewhere else in the world).

So basically, when I hear someone say engineer instead of developer I assume they have a little more experience in that field, but that's not the full story.

But, we can take the definition further. If a mechanical engineer can predict how their product will behave then we should hold a web engineer to the same standard.

Therefore, a web engineer is someone that has a greater ability to predict the way software will behave.

That's because a web engineer is someone with a higher level of skill and therefore predictive power. Similar to the difference between a mechanic and a mechanical engineer a web developer can use the tools that the web engineer built.

A web engineer should be proficient in pattern design, automated testing, and fault-tolerant systems.

Below is how the University of Waterloo describes their Computer Science and Software Engineering degrees. This is useful because it's an actual authority using the term software engineering and they give a good description of what it is.

So a software engineer is someone that focuses less on the abstract and more on the practical. They're engineers and as such they should be able to build software through less trial and error and more predictably.

Through my research I came across this Reddit thread on the subject, and one of the users reference a video on a CS professor's take on the term "engineer".

In the video the professors shows the a Calvin and Hobbes comic strip to illustrate his point. 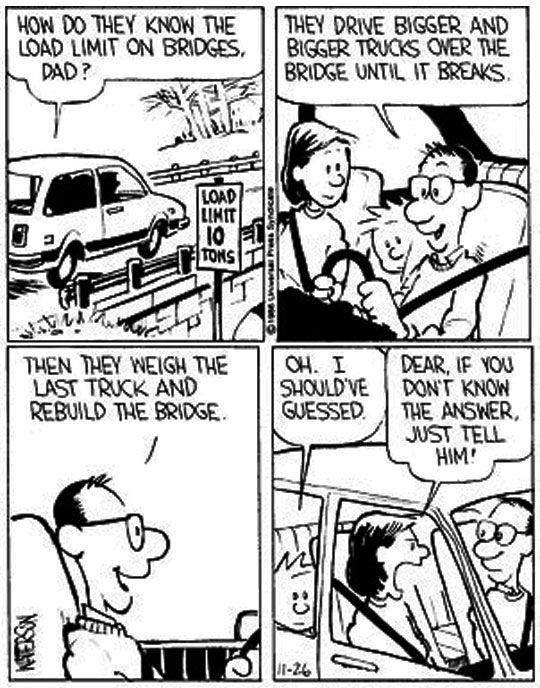 It's a funny comic and makes a good point that software developers do typically do a lot of trial and error.

And, for a moment I completely bought the argument that developers cant predict software, until I read another users comment which said,

If anything his argument with the predictive is completely off and shows he hasn't worked with engineers and kind of assumes that he knows what they do (but being in academia, he probably doesn't know much). He uses that bridge cartoon as saying since civil engineers don't test bridges by adding more weight until it breaks, that they are predictive. The issue is, guess what, they do. Not with the bridge as a whole, but say we're working on a suspension bridge. Those cables are tested by taking a sample and adding tension until they snap. Do that enough and you have an accurate predictor of their strength and therefore you can measure their impact on the bridge as a whole. Aka, they take a unit, test it, and then use the results to see the total effect on the system. It's no different than software engineering. Engineering is a process. A process of using tools, measurements, tests, and math to build something.

My ex is a mech eng. She's working on a new forging process. The calculations didn't match up with the results the first time. So she took that, altered the simulation and repeated until theory matched reality.

Also, the 99% security vulnerability thing is a lot different. Mechanical engineers build jets, but those are still vulnerable to bullets. 110 years ago, engineers couldn't build skyscrapers in Chicago because the soil was too soft. Buildings aren't fireproof and most aren't even earthquake proof. The fact is, everything engineers build is vulnerable to something. The difference is those disciplines don't have people actively trying to find every weakness. Storms aren't trying to figure out the perfect place to hit a house with lightning to burn it down, but that's the challenge developers face. The fact is, we probably make things more bullet proof then most other engineers because they have a minimum level they have to surpass to be ok. Developers have to think ahead to what could exist in the future to bypass anything.

Putting aside the snarky nature of the comment, he has a good point. The typical product development lifestyle for an engineer involves many, many prototypes.

Murray Leardon a VP of a product development company is roughly quoted saying, "The light bulb took countless prototypes and you think you can build this in one go?" This was a remark when asked how he handles clients that think they can get a lot more done in a single prototype.

The next comment goes something along the lines of "that was a beautiful analogy" and I completely agree.

And the fact that software engineers can't predict every security vulnerability is just the same as an engineer not being able to think of every way his prototype could go wrong until he builds it.

Only through experience can they understand some of the pitfalls, and even then there will always be new things to be aware of.

You can have a web developer that goes through far more trial and error and just stumbles his way toward the solution without understanding the underlying architecture.

It's all about their level of skill.

It further enforces the need for the term web engineer. I think it's a completely valid term used in the right context.

But, the software industry is still pretty young and the language around it will continue to evolve. Considering that the education industry is inclined to distinguish a Computer Science degree from a Software Engineering degree I think we're already heading in that direction.

In the future it will also be likely that more companies require certification to work there. Many software development companies require a CS degree for the job position and I expect that number to increase over the years. Especially in companies that need to be more risk averse.

This is likely because if a computer circuit malfunctions it can be easily tested for and won't cause a huge loss of life. If a civil engineer doesn't do their job correctly then people will die.

So, maybe a license wont become more of a hard requirement for software engineering. Only time will tell.

The last distinction that I think is important is the difference between frontend and backend web development.

I think calling yourself a frontend developer doesn't typically do enough to communicated what you actually do, but if you tell me you're a frontend engineer then I immediately think, "Oh, this guy builds web applications and not just static websites."

When you say you're a backend developer the distinction between a backend developer and backend engineer doesn't do as much because either way I know that you're going to be building out APIs. However, all the points I made above I think still hold for this case.

Let me know what you think in the comments 😊